Yesterday our family had the delicious fun of making pizza in our wood oven for the first time in the yard out by the picnic table under the oak tree. The wind was chilly even though the sky was bright so we did a bit of dashing between outside and inside but the results were very encouraging!

Two years ago my husband read the major ‘important’ books on the construction of bread ovens and the project became a family project over the past two years. 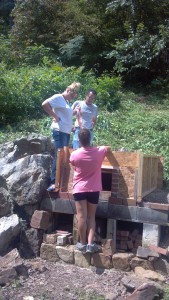 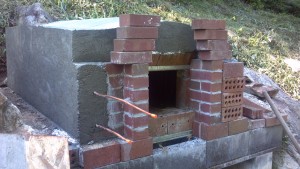 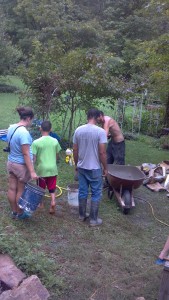 There is still earth to be moved and decorative rock to be laid but while the finishing touches have yet to be made the interior of our oven has been just waiting for me to get galvanized. I must have watched 25 youtubes by wood oven builder cooks to learn as much as possible. Two of the grandchildren spent an afternoon last week bringing wood up from the lower pasture and stacking it ready for me.

I collected the tools I would need – several of them scrounged from my garden. I’m going to sacrifice my old narrow hoe as a scrapper to push the coal around. I found an old string mop for swabbing the floor of the oven and we discovered as we worked that my short-handled peel will have to have a much longer handle to prevent burns.  (And much cursing)

Because I’ve been so slack about feeding my sourdough starter lurking in the back of my fridge I revved it up for the pizza dough. It turned out pretty nice – strong enough to take handling to be rolled enough since we all like thin-crust. 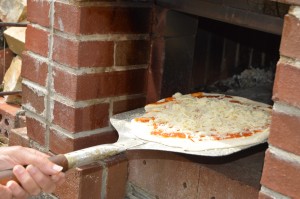 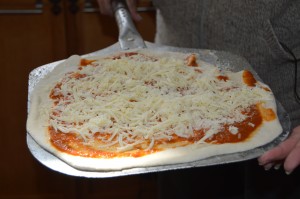 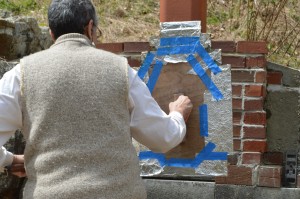 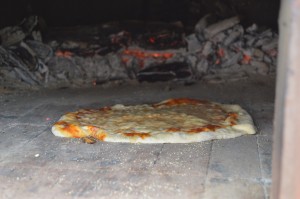 My ‘slide it under the pie quick’ technique with the peel hopefully will improve in time. I’ve never had that dramatic flip an omelet skill. So you won’t be surprised when I confess that the first pizza didn’t come off the peel with anything like a professional ‘swish’. Instead it stuck to the peel on one corner skidding to a halt half way off and if the daughter hadn’t been right alongside me ready to whip out the spatula to shove it free there would have been a super burned mess and much cursing.

Ah ha, I say to myself, that’s what the cornmeal is for. I sprinkled much more cornmeal on the peel for the next one. That one went more smoothly and the one after that as well. 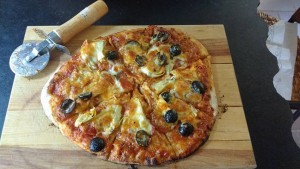 Everybody was satisfied. Except for the ‘ugly’ first one (it was tasty just ugly) the six pizzas were successful. We all agreed we will be doing this again as soon as possible and add some kind of roast and a loaf of bread and other goodies.

In which I make beef and venison hand pies

Roasting Garlic for our summer eating