To top off settling in a new place shortly after I got here I decided to go to college for an endless number of years sometimes living far from home to do the history thing I have been doing as a scholar for almost three decades. Now in retirement I have returned to many aspects of my earlier life; we raise a lot of what we eat; I teach others what I know. Our family now includes four households; two sons and our daughter live close enough to be part of our food economy. What follows is a summary of our recent food adventures. 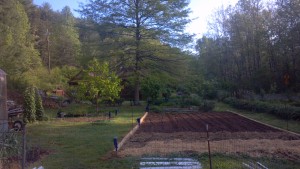 2012:
Heading toward Thanksgiving is pretty much when I close up the summer and early fall making/doing/storing food bustle. I’m getting ready to hunker down; you’d think I was a squirrel. South Dakota winters have a way of sticking in memory even all these years later.
I’ve count up the jars on the shelves of canned tomatoes, peaches and applesauce, and frankly, take a moment to feel a bit smug (and a bit giddy in anticipation) with a freezer full of homegrown veggies and chicken. Our spring house shelves are loaded with boxes of homegrown potatoes, bags of local grown apples and this year several spectacular 10-15 pound winter squashes.
Does all this food and the two beds of fall/winter fresh greens still out in the garden give me a feeling of self-sufficiency? No indeed. Why? Because at my house, while we raise a good deal of what we eat, and make a good deal more from scratch, we are in no way prepared to live without coffee, chocolate, flour, cornmeal, lemons or avocados, just to hit a few high points on my regular shopping lists. Along with the gasoline powered generator as emergency backup we see our food bounty as a way of having plenty when the power fails. Next year we’re thinking of raising a pig or two for the freezer. 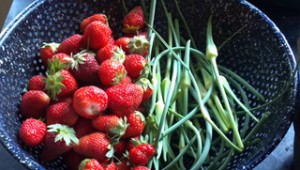 2013:
Every harvest season is different. This year we raised two pigs; we bought weaner pigs for $65 bucks apiece in April sending them to the slaughter house in late November. The result was 397 pounds of meat in our freezer. So we now have two freezers full of meat but this past growing season the garden was a disappointment in many ways.
As happened to many gardeners in the East the emergence of the 17-year cicada, which started as amusing, moved swiftly through to pain in the ass, ended in actual disaster. My fruit trees were ravaged. A continuing plague of flea beetle and squash borer left me with no summer squashes or eggplant, and very little cucumber.
The weird weather held the sweet and chili peppers back till September and I got only enough tomatoes for less than 2 dozen jars on my canning shelf. Even my usual outdoor winter planting of greens has failed me. Damn. This coming winter I’ll have to wander through the seed catalogs with next year’s plans bright in my imagination. In August we bought two bottle calves with the idea that we would raise one to be a milk cow. 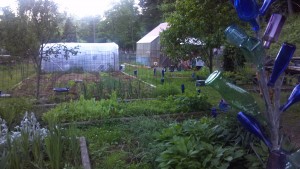 2014:
All late winter and spring we did not have much of our own canned tomatoes, pickles, or frozen sweet corn as last season’s garden didn’t begin to produce till late. We began to catch up with the summer produce; lots of tomatoes but again not too many cukes or crookneck squash. No eggplant as flea beetle is very bad. The high hoop house is still in the experiment stage and has become a place to produce hot compost and also our sprouting trays for livestock fodder. The calves have been weaned to hay and calf pellets with additional sprouts for fresh greens. The hens love the sprouts too. Currently we buy hay, hen feed, and whole oats.
One cow went to the slaughter house in May. Thankfully the garden was much more productive than last year. Then in December the 16 month old cow went to the butcher; so the freezer is full. From the soup bones I canned over 35 quarts of beef stock. Planning for our four households continues to center on how many chicks to raise for meat birds next year, how many laying hens to keep, and when will we raise another pig. [to be continued]

‘Back in the day’ the Sorensen’s on the farm